How to Respond When Your Child Gets in Trouble at School

I am so excited to welcome Sarah from The Orthodox Mama today! Sarah is a middle school teacher and mom of three, and I love reading her perspectives on faith, family, and frugality.

For two years I cringed every time the phone rang because I feared The Dreaded Call. You see, my oldest son got in trouble at school. A lot. During preschool and kindergarten, he frequently had bad days and saw the inside of the principal’s office more than I care to admit. So when the phone rang, I prayed that it was not his school calling to tell me about some misbehavior.

This was made even worse by the fact that I am a teacher within the same school district. I am one of those crazy people who teaches middle school on purpose because I actually enjoy slightly neurotic, overly hormonal, awkwardly wonderful twelve and thirteen-year-olds. I know—I think I’m strange, too!

Because I have been teaching for ten years, I could see the situation from both sides. I understood where the teachers and principal were coming from. I knew that certain behaviors were unacceptable and that classroom management must be maintained. However, I was also my son’s mom and got tears in my eyes every time I thought of him being labeled “the bad kid” by others. I saw his sweetness, the way he gently held his newborn brother, and his wondrous curiosity.

From that two-year experience, I gained a deeper appreciation of the delicate balance in a home-school relationship. And, I discovered a few simple tips that helped strengthen that relationship in a way that positively affected both sides.

How to Respond When Your Child Gets in Trouble at School

Whenever I received The Dreaded Call, I resolved to listen first. It was easy to want to immediately begin asking questions, making excuses, or inserting my opinion. However, if I didn’t listen first, I didn’t really know the entire situation. Once I listened to the teacher in the entirety of what she had to say, I could begin to understand what had happened and hear what she had done in response.

It’s really just common courtesy—listening carefully to others shows our respect for them as people. By giving the teacher that respect, you begin the conversation on a good note.

2. Try Not to Take it Personally

As parents (and perhaps especially as moms), it can be so easy to see our children as an extension of ourselves. Therefore, we can feel personally attacked when a teacher points out a misbehavior or a flaw in our child. This is rarely productive, though. It just causes us to become defensive, angry, and even combative.

I realized that I dreaded receiving The Call so much because I felt that I was being judged a bad parent. This belief made me immediately want to defend myself and my overall worth as a parent. However, once I tried to stop taking things personally, I was able to actually help my son. After all, when I was focused on me, I couldn’t really help him. 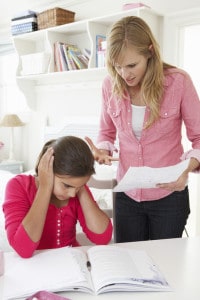 Next, it is important to always believe the teacher. As a teacher myself, I know that teachers work hard to provide a safe, nurturing environment for their students that will help them grow and reach their full potential as learners. Sometimes this means that a child will need to be corrected in order to learn the behavior that is appropriate at school and so that other students are respected and safe.

When my son’s teacher talked about his difficulty following directions, keeping his hands to himself, and listening during circle time, I believed her. I based our entire conversation on the assumption that what she told me was correct. I gave her the respect of believing her words.

Now, one quick side note. Teachers are obviously imperfect people. We also are busy with a classroom of 20-30 children and may not see everything in its entirety. If you really think that a teacher may have misinterpreted events, ask him or her in a calm and respectful tone. Finally, if you still feel that your child was not treated fairly, speak with the principal only after speaking with the teacher first.

Once you have listened in an objective manner, believing the teacher, now it is time to calmly ask questions. If you don’t understand part of the story, ask for clarification. “What was he supposed to be doing at that time?” “What time of the day was this?” “Had she received a warning?”

Keeping a calm, logical tone helps the conversation proceed productively so that the problem can be solved in a positive way. If you are upset and need a bit of time and space before you can ask questions calmly, just ask the teacher. Say, “I need a bit of time to think about this. May I call you back or e-mail you later today?” Generally the answer will be yes.

Now, teachers are professionals who have undergone extensive training in classroom and behavior management, child psychology, pedagogy, and more. They also see your child in a completely different context than you have ever seen them. Children can behave very differently around peers and in a school setting than they do at home.

With that said, you also know your child better than any teacher. You know what motivates them, what discipline methods may intimidate them, what environments overstimulate them, etc. Bring your knowledge of your child to the table whenever you speak with the teacher.

I knew that my son was very bright. He had been reading since he was four, and so the kindergarten curriculum simply wasn’t challenging him. And, because he has ample energy, when he was bored he wanted to do something—anything!—else, which caused him to get in trouble.

Because I knew this about him, I brought it up to his teacher. Together we worked to come up with a positive solution that would help him both academically and behaviorally. He began going to first grade for reading time each day. Suddenly he was acting like a different child!  Now that he was being challenged, he enjoyed school and worked well with his peers.

6. Find Ways to Support the Positive Behavior at Home

This could mean offering small incentives for good behavior. For example, during that rough kindergarten year, we allowed our son to watch half an hour of his favorite television show (Wild Kratts) if he had a good day at school. Since he isn’t allowed to watch very much television, this was a powerful incentive. He also saw the consequence of poor choices—no Wild Kratts. In addition, we practiced following directions and sitting still. He was able to improve these important skills with some extra encouragement at home.

I am very happy to tell you that this year I have not received The Dreaded Call once. Part of this can be attributed to my son’s maturing. However, a large part of it is due to the great effort my husband and I put forth last year in building a positive relationship with his teacher.

Because of that good relationship we were able to work together at home and school to help our son learn and grow, which is every parent’s goal.

Related reading on Organized Motherhood: Tools to Help If Your Child Gets in Trouble at School

Sarah Wright is an Orthodox Christian, wife to her husband Dan, and mother to three young children. She also is a full-time middle school teacher and has just written her first children’s book. Sarah writes at The Orthodox Mama, a blog about faith, family, and frugal living. Some of the most popular posts include: How Changing My Morning Routine Changed My Entire Life and The Worst Marriage Advice I Ever Received. You’re invited to head over and take a look.