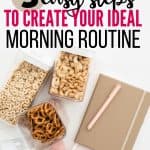 Now that the kids are officially back in school, getting out the door in the morning should be easy. After all, we’ve been following our morning routine for a long time. Everything should run like clockwork, right?!?

Last year, after having an awful morning, I finally decided that enough was enough. It was one of those days that was enough to make anyone crawl back into bed. It started when I made my coffee without a coffee cup (thankfully the Keurig spill cup was empty, so it actually caught my coffee before it spilled all over the counter and floor). I also sneezed and told MYSELF “bless you.” I think I meant to say “excuse me,” but I was just so tired that I didn’t even realize what I was saying (don’t worry, my five-year-old immediately corrected me 🙄).

The truth is, I’m a terrible sleeper. I stay up too late and I don’t bounce out of bed in the morning. I also get five hours of sleep most nights and then try to cram and get more on the weekends.

But I had a little bit of an aha moment that day when I was checking my WeightWatchers app on my phone.

I’ve been trying to lose weight forever. After a lot of frustration and wondering why I wasn’t seeing results, I started to notice patterns, or habits, that I could change.

It was those patterns that helped me finally move toward the results that I wanted, like getting more sleep or losing weight.

When I first started tracking my “daily points” in the Weight Watchers app, I realized that I’m a naturally healthy eater during the day, but I was drinking my points in coffee creamer and wine (and the not-so-occasional cookie binge didn’t help).

After I saw my unhealthy habits, I was able to find substitutions and make changes that have been working really well.

But how could I apply that knowledge to my evening, morning, and DAILY routines?

You see, I have a habit of staying up too late, a habit of waiting until the morning to pack lunches as my kids run out the door, and a habit of getting five hours of sleep during the week and then trying to make up for it on the weekends.

But the good news is that habits are things that we can change.

So, if you’re struggling with your daily routine, here’s how to create a more effective routine that works for you!

Get the Morning Routine Template to create your ideal morning routine and get out the door on time!

Success! Now check your email to confirm your subscription.

Free Resource Library
Enter my free resource library for my latest files and printables! The password is ‘TTWsimplelife’ — please copy and paste that in at the link above. Thanks for being a subscriber!!!

What is your current routine? How do you start? How do you end? What time do you need to finish your routine to be on time?

Include the amount of time it takes to do each task, too. Be realistic with this step and include actual times, not ideal. Maybe you’d love your child to finish his breakfast in ten minutes, but if he dawdles, set a timer and record the actual time that he takes to eat from start to finish.

If your routine (or even certain tasks within your routine) are time sensitive, include the start and end times. For example, if you have to get your child on the bus by 7:27 a.m., include that as your end time for that task.

Download this morning routine template to analyze your routine.

Once you’ve tracked your time and gotten an honest look at how you’re spending your time, review it objectively.

Are you spending more time than you think on one thing?

Is there anything that you could do at a different time, like making lunches as you put away the leftovers from dinner?

How could you set yourself up for success? Could you set out breakfast food and dishes after you clear the table at night? Could you lay out a week’s worth of outfits so your kids know what to wear (and still feel like they’re choosing their own clothes every morning)?

Break down your routine and look at each task. See if there’s something (anything) that you could do differently. Then, try making that one small change. Once that becomes a habit, try something else. Little by little, you’ll get there!​

Don’t try to completely overhaul your routine in one day, though. You’ll quickly burn out and it won’t last. Instead, stick to making one small change at a time. Once that becomes a habit, try another change.

Creating a morning routine that works for you, especially if you’ve been struggling for a long time or have a lot of “bad habits” in your existing routine, can be a challenge. But by tracking your current routine, reviewing what’s working (and not working), and making one small change at a time, you’ll be able to create a better routine that actually works!