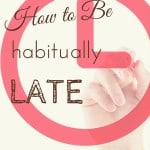 I plan on being late to my own funeral. My theory is I’ve never been on time for anything in my life. Why start now?

If you’ve tried (and struggled) to be on time and it just isn’t happening, I feel your pain. Even when I plan ahead and get ready with time to spare, I’m still magically late.

In all seriousness, tardiness is a character flaw. Most people hate it when others are late. Late people are seen as rude, inconsiderate, and lazy. After all, everyone values their own time. If someone constantly keeps you waiting, clearly they don’t care about you or your time.

Maybe you’re desperately trying to improve, like I am. Maybe you want to set a good example for your kids. Maybe you just want your friends and family to see that you’re making an effort. I’m right there with you.

Instead of sharing some sappy list of ways you could improve your time management skills (because, let’s face it, I’m sure you’ve tried them all), I decided to share a list of my favorite ways to be late. Hopefully, you can at least learn from my mistakes (even if I can’t seem to learn from them). 😉

7 Excuses for Being Late

These are my actual reasons for being late, not that I’d ever share them. 😉

My best advice: If you’ve ever been late because of these reasons, just smile and apologize. Because seriously, who does this?!? Early people wouldn’t understand!

1. Go back to bed after you drop the kids off at school

Ah, bed! It’s blissful! Until you realize that you overslept and needed to be somewhere 15 minutes ago.

2. Hit the snooze button as many times as you can

Oops! They really need to redesign alarm clocks. The snooze function is the worst invention ever.

3. Plan ahead – and then get sidetracked during your “extra time”

Yay, you did it! You actually managed to get ready with time to spare. And then you decide to add one more thing to your purse. And then the baby needs to be changed again. And then… Suddenly you realize that you’re no longer early (or even on time).

Oooh! What’s that? A status update? From your best friend’s sister’s friend’s aunt?!? Oh, this will only take a second…. 30 minutes later…

Kudos to you for starting a capsule wardrobe! Now that you have it, you don’t need to lay out clothes the night before because choosing outfits is simple! But even if you did (golf clap), that’s not the outfit you want to wear today. And those jeans have a mysterious stain. And that shirt? Nope, just not feeling it. Just wear the same wrinkled outfit that you wore yesterday. No one will notice the pit stains.

6. Forget to wash your underwear

If you’re lucky and realize that you need to do laundry before you start getting ready, you might get to throw your underwear in the wash. Forget about trying to dry it, though. The spin cycle should make it dry enough.

7. Write a list of “don’t forget” items – and then forget to look at it

You thoughtfully made a list of every important item you needed to bring. You even taped your list to the door. And then you walked out, confident that you were going to be on time. You arrived at work, patting yourself on the back for being 30 seconds early. Without your laptop. Or your breast pump. Or your pump parts (that’s why I suggest buying duplicates and leaving them in the car, as weird as that sounds). It’s going to be a great day!

Sadly, I’ve used every excuse for being late on this list (multiple times). I’m not doing it to be rude. It’s not because I don’t like you. Being late is embarrassing, and I’m trying to improve. It’s just more difficult than you could ever imagine!

ha ha - this is a post I really didn't need to read! I'm often late but try so hard not to be. Or if I'm early (rarely) I'm stupidly early and it's really no fun, so I revert to type!! Thanks for linking to #PoCoLo :)

Ha ha. We always used to be 15 minutes late as kids, my mum struggled! I'm now always 10-20 minutes early!! I'm sure it'll change when I have a toddler to bundle out the house! I'm also checking my FB status a lot... #pocolo

FB was the worst invention ever! ;)

I love this! I'm generally an always early or on-time person but growing up my best friend was always late for everything. That said, although I know when my trains to work are in the mornings, I still always find myself dashing to catch them rather than strolling, so I'm clearly not as organised as I think... X #PoCoLo

Haha! Trying to catch trains is the most stressful part of a morning. Trying to coordinate them and then worrying about being even a minute late.... I used to take trains on the weekends to go into the city and even then it was stressful!

No matter what good intentions I have and no matter how hard I try, I am always late for my doctors appoirments. I will add in extra time. I watch the clock ..see that I am doing well as far as time...I decide to add something since I am doing so well..next I look and RATS ..LATE AGAIN!!!

On a positive note, most doctors are always late, too! ;)

I am always and I mean ALWAYS late to everything, too. I want so badly to be the person that friends don't tell "It starts at 10:00" when it really starts at 10:30 but I'm afraid I am! #MMBH

My sister-in-law finally started coming over early before we have to be somewhere so she can help me get out the door. It worked really well when we went on our last girls' weekend!