We’ve all heard that TV is terrible for kids. It makes them hyper. It gives them a shorter attention span. It probably even kills brain cells. However, research also shows that TV can teach children.

TV, especially shows that aren’t age-appropriate, may not be the best option for kids. However, there’s a time and a place for TV in the house.

With all the conflicting information about TV, how do you know when to turn on (or off) the TV in your house? How can you make sure that your kids are being enriched, instead of learning the latest ninja turtle kick? What acceptable alternatives do you have for the TV?

When is TV bad for kids?

Researchers all agree that TV has no positive benefits for children younger than two. For children over the age of two, there are some positives and negatives to watching TV.

TV can teach children to demonstrate positive social behaviors, such as helping others in need, interacting with others in a positive way, and acceptance of others. It can also expose children to different cultures, places, and things that they would not normally see. Studies have shown that many children’s programs, such as Sesame Street and Dora the Explorer, expose children to more diversity than adult programming.

Unfortunately, for every one instance of positive social behavior that children see, they’re likely to be exposed to two instances of violence. Also, children younger than eight aren’t able to tell the difference between reality and fantasy, so they often imitate the violence that they see on TV. Thinking that it’s socially acceptable behavior, the children imitate the violence between both the “good” characters and the “bad guys.”

Even when the TV was turned on for “background noise” and children “weren’t watching it,” the children in the household seemed to have negative consequences, such as increased risk for obesity, violent behavior, and more. Studies also indicate that, although tobacco ads are no longer permitted on TV, children who watch TV are more likely to use tobacco, drink alcohol, and learn about sexuality. 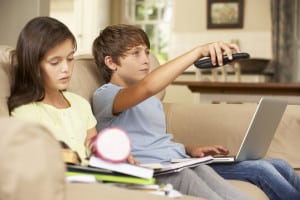 How can you make sure your kids are learning from the TV?

If you choose to let your children watch TV, try to make sure it’s an educational program. Popular shows include:

Another way to teach your kids about the TV is to have regular discussions about the shows that they’re watching. Discuss things like the story line and make predictions about the show’s ending. Talk about how the characters interact with each other. This is also a great opportunity to discuss things like stereotypes, which unfortunately still exist in many Disney movies (notice how there are three males for every one female, or how characters of color tend to play supporting roles). You can also discuss things like the camera angle with older kids and talk about whether the  media is portraying the entire story. 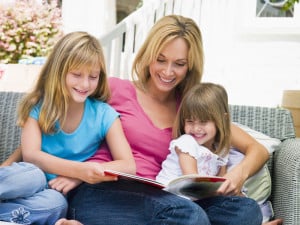 Is there an alternative to watching TV?

One of the biggest problems with letting your kids watch TV is the opportunities that they’re giving up. Instead of watching TV, your kids could be interacting with other people, reading, or playing.

Children today watch an average of 37 hours of TV a week. By limiting the amount of TV that your children watch, you’ll limit the negative consequences that they’re exposed to. You can also use the extra time to snuggle and read books, which can also teach your children about other cultures and places, as well as reinforce positive social behaviors like sharing.

In my house, we often use TV as a reward for good behavior, such as watching five minutes before school if my son gets himself ready without dawdling. If he had a good behavior report in school, he is allowed to watch 30 minutes after school while I prepare dinner.

Other than using TV as a reward or an occasional bonding experience (some Friday nights we have popcorn parties and watch a favorite movie), we try to limit the amount of TV that the kids watch in our house. We also have a “no TV policy” during the day, so the kids are never exposed to the TV as “background noise.”

Before turning on the TV in your home, it’s important to make an informed decision. Watch shows with your kids, discuss the things that they see, and provide alternatives to the TV.

Watching TV can have positive effects on kids, but it’s important to make sure that your kids are benefiting from the shows instead of learning negative behaviors.

To learn more about the effects of TV on children, visit this article from the University of Michigan.

I had to ban Dora as it taught my daughter bad behaviour.

Thanks for sharing at #everythingkids this week!

Oh no! Thank you for sharing.

I don't let my kids watch too much tv but when they do get a chance it's usually Veggie Tales or Super Why, something that is definitely age appropriate.

Thanks for the recommendations! I've never watched Super Why, but I've seen it advertised. We'll have to check it out.

We have switched to Netflix so we don't have to deal with commercials and that has helped a ton. Thanks for sharing with #theCozyReadingSpot

I am currently trying to start a family. I do not know how I will handle TV with my kids. I do appreciate these tips and the programing recommendations.

I firmly believe in moderation in all things. Before I had kids, I swore that I would never let them watch TV, but we now use it as a reward. It also depends on the child. My son begs to watch TV (and has since he was little), but my daughter doesn't really care for it.

I can always tell when our kids have had too much screen time: it becomes their default. When I see them heading for a screen at the first hint of free time, I do some serious back-pedaling and we make the tv off limits for a while. Kids need unscheduled, active, and creative time with no screens!

Yes! It seems to change their personalities!