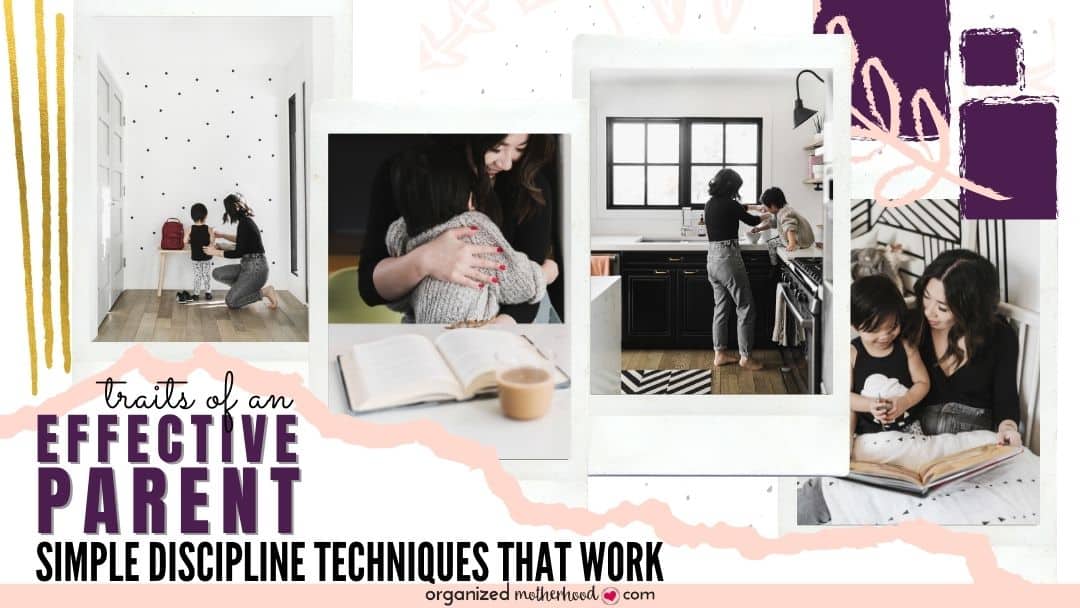 Having the characteristics of effective parenting is a learned process that takes effort, but if your child is struggling in school or if you’re struggling as a mom to be a better disciplinarian, these tips can help, especially if your child has an attention deficit disorder.

I do not believe in punishing a child with attention deficit hyperactivity disorder for behavior that was caused by their ADHD, but I do believe consequences are necessary.

Consequences are natural outcomes for behavior. In fact, one of my favorite parenting books, Parenting with Love and Logic, discusses how to use natural consequences as part of your discipline strategy.

But even as adults, consequences play a big role in our actions.

I know if I don’t pay my electric bill, the consequence will be that my electricity gets turned off, and I have to pay a fee to have it restored. The electric company doesn’t call me and lecture me.

They don’t remind me of all the other times I promised I would pay on time, and I didn’t. There is no emotion involved. The consequences were set and told to me in advance.

It doesn’t matter that I have ADHD or that it can cause me to be forgetful and not pay my bills.

As an adult, you still have to pay the consequences. That’s life. The nice thing is that once it is paid, the whole situation is put into the past and only brought up again if there is a continuing problem directly relating to it.

In a school and home situation, these principles of effective parenting should be applied in order to prepare children for life.

Too many times, I’ve seen students who were very good at making excuses for their behavior and felt that should be enough to excuse that behavior. However, excuses don’t get you far as an adult.

To be an effective parent, you need to show your children that all actions have consequences.

Here are some tips on how to start applying consequences to behavior.

1. Be proactive and not reactive

Address behaviors before they happen and set up the consequences before you’re annoyed or frustrated with the child.

I love the course, Parenting Manual 101, which was created by a teacher and mom. It gives you all the tools you need to create a proactive discipline strategy while raising happy, good kids.

Decide on a consequence that is logical but not one that will cause a repeat of the behavior.

This comes into play with hyperactivity behavior. Teachers should never shorten recess or lunch periods for hyperactive behavior. Students with ADHD need that time to burn off as much energy as possible.

A better consequence would be to have the student do 25 jumping jacks or even run laps around the playground instead of sitting inside during that time.

3. Write down the consequences and review them with the child when necessary

Suppose Johnny was talking during class. Ask Johnny what the rule was about talking.

Usually, the student will state the rule and the consequence. You simply agree and explain that’s what is going to happen.

Have disciplinary conversations privately, rather than in front of siblings or other students.

4. Reinforce the rules and consequences

If the child protests, remind them that the rules were set up before and they didn’t protest them then.

It is unfair to protest a rule after breaking it. If they didn’t like it, they should have discussed it earlier. End of story.

5. Ensure that the consequence is effective

If a child repeatedly breaks a rule, the consequence is not harsh enough or being applied consistently.

The very first lesson in Parenting Manual 101 deals with how to be more consistent with their kids, but it’s a lesson that even adults could learn from.

For example, most people speed on the interstate because they are not always caught, and even when they are, the fines won’t hurt most of us.

Don’t be afraid to adapt. Re-evaluate the situation and see if it’s working. If it doesn’t work, change it. But make sure that you’ve given things a chance first.

To be an effective parent, you need to have strong disciplinarian skills. But that doesn’t mean that you need to be harsh or physically discipline your child. Instead, try these tips for natural consequences.

For more tips to be an effective parent, check out the Parenting Manual 101 course.